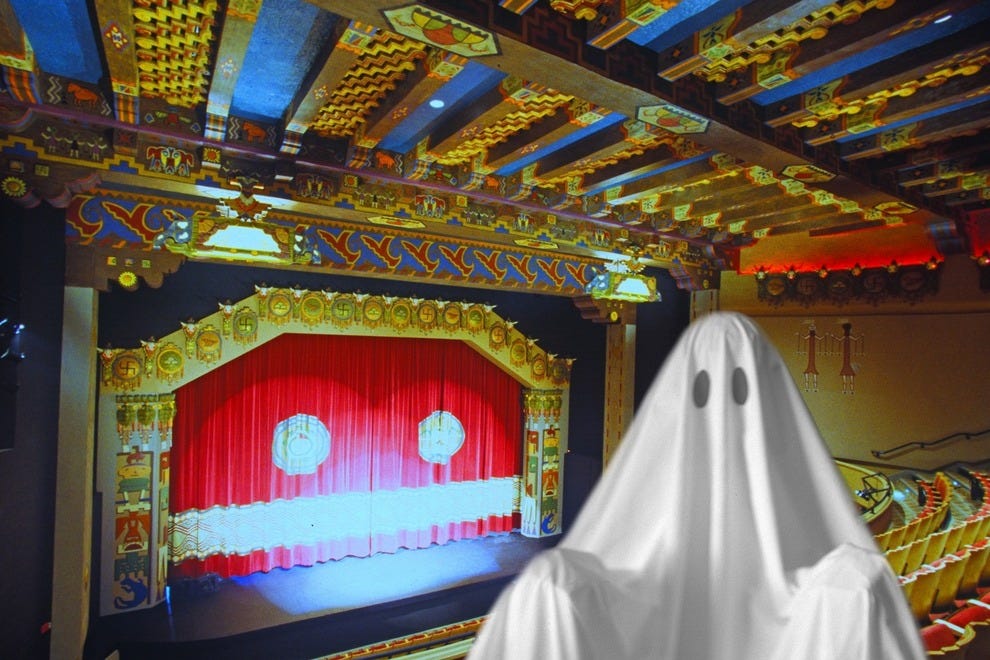 Ghost at the KiMo Theater? — Photo courtesy of © Steve Larese

Founded in 1706 by the Spanish and home to Native Americans long before, Albuquerque, has centuries of storied history. Tales of witches, ghosts and skinwalkers have been told for hundreds of years in Native American, Spanish and Anglo culture, and are woven into Albuquerque’s collective consciousness today. Some of this history lives on as ghost stories.

Many people claim to have experienced unexplained sighting and feelings at the following properties, many of which date to the early 1700s. At best, Albuquerque’s ghost stories keep history alive. At their scariest, plenty of people swear that the living are not alone here.

Ghost Tours of Old Town, Albucreepy Tours and the Southwest Ghost Hunters Association are great ways to learn more about haunted Albuquerque, and here are 10 of our favorite locations that are open to the public. Check them out and see for yourself, if you dare.

The KiMo Theater opened in 1927, and its Pueblo-Deco design and decor still thrills today. Inside, cow skulls with glowing red eyes, funeral canoes and Native American motifs including pre-World War II swastikas adorn the walls and ceiling of this intimate theater where everything from movies to opera is performed throughout the year.

It was in 1951 when a water heater exploded, killing a 6-year-old boy named Bobby Darnall, Jr. Many believe Bobby’s playful ghost haunts the KiMo, so much so that it’s now tradition for performers to leave out a plate of donuts and trinkets for Bobby. Those who don’t risk disastrous performances wrought with technical problems.

Albuquerque’s Old Town was where the city was founded in 1706, and many of the shops and restaurants surrounding the central plaza were once homes of the original Spanish families who settled here. This particular building was constructed in the 1750s and served as a brothel at one point.

High Noon Restaurant & Saloon is now best known for its steaks, but employees speak of the Lady in the White Dress who is seen the Santos Room, and unexplained sounds. Bartenders attest to glasses sliding across the bar and floating through the air at night.

This Old Town restaurant serves great New Mexican cuisine and is known for its pet-friendly patio. One of, if not the, oldest homes in Albuquerque, the adobe home was built in the early 1700s by the Ruiz family, which owned the building until the last family member, Rufina G. Ruiz, passed away at 91.

When current owner Marie Coleman purchased the property and began renovating the building as a restaurant, she began hearing a disembodied voice scream at her to get rid of the contractor, and items would be found in disarray. It was determined that the voice was that of Rufina’s mother, Sara. Marie began speaking to the ghost and assured her she has the best intentions for Sara’s home.

Things calmed down, but employees over the years have seen the image of a woman in a long black dress disappear in the dining room after hours, and customers have reported feeling her presence as well. Or maybe it’s just the Sangria Margaritas.

Another Old Town restaurant, this was originally the home of the Armijo family. It was built around an enclosed patio, hence the name, which has since been roofed but allows for a large cottonwood tree to grow through. It was turned into a restaurant in the 1930s and has been so ever since.

Employees speak of four ghosts that still call La Placita home, including one of a little girl who died in a bedroom here in the late 1880s. Employees hear their names called only to find no one is there, and feel unexplained cold spots. Customers have reported seeing a misty, odorless smoke over their table that dissipates with no explanation. 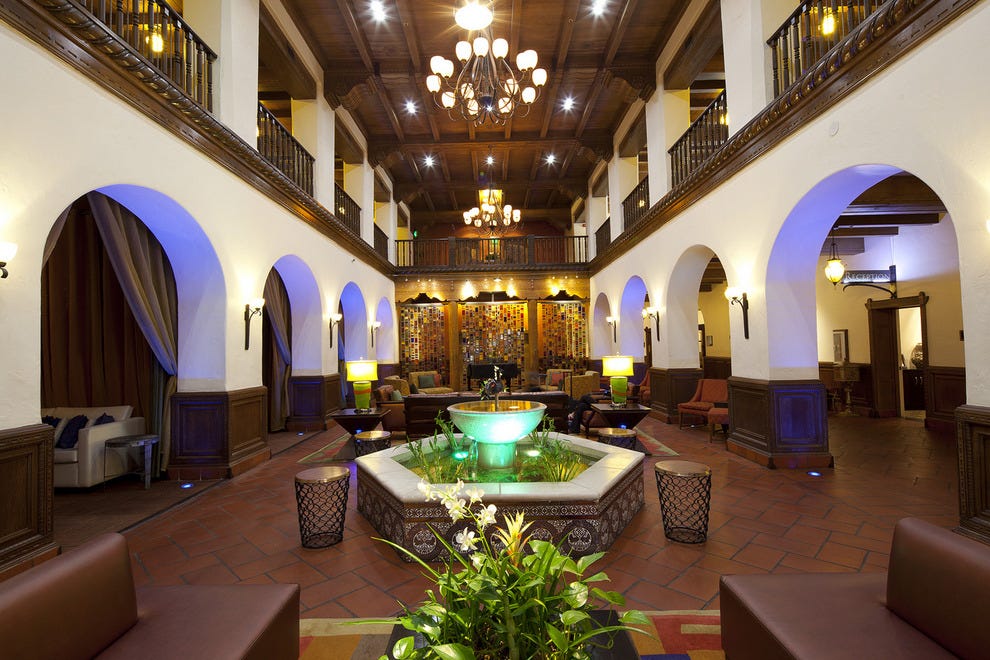 New Mexican Conrad Hilton of Hilton Hotel fame built Hotel Andaluz in 1939. It was New Mexico’s tallest building at the time, and was the first building in the state to have air conditioning and an elevator. It was only Hilton’s fourth hotel in the nation.

Hilton and Zsa Zsa Gabor spent their honeymoon here in 1942, and guests may rent that penthouse suite for themselves. The property became La Posada de Albuquerque in 1984, and was sold, renovated and reopened as Hotel Andaluz in 2009.

Hotel Andaluz has 107 rooms, and a ghostly female guest is seen looking for one of those rooms on the 7th floor, dressed in a 1940s party dress. On the 4th floor, an older woman in a pink dress is seen wandering the halls before vanishing.

This charming 1700s bed & breakfast in Old Town was once a 40-room adobe house and served as the governor’s mansion in territorial New Mexico until 1845. Charles Bottger purchased the building in 1893, knocked it down and built the current American Foursquare-style home that’s there today in 1910.

It was the first home in Albuquerque to have gas lighting, and it was called the “Pride of Old Town” after its completion. It later became an inn, and notorious gangster Machine Gun Kelly, Elvis Presley, Frank Sinatra and Janis Joplin are just some of the guests who’ve stayed here. But some guests apparently have never left. Charles Bottger is said to still make his presence known, as is a lady who heavily sighs and a ghost called “The Lover” who likes to hop into bed with sleeping women.

Hotel Parq Central began in 1926 as the Santa Fe Hospital for employees of the Atchison, Topeka & Santa Fe Railway. Built in grand Italianate style, the building later became a mental health facility for children in the 1980s and was renamed Memorial Hospital.

Deserted for years, in 2010 it opened as Hotel Parq Central, a luxury boutique hotel that tips its hat to its railroading history with historic displays in the lobby. It also has one of the best rooftop bars in the Southwest, Apothecary, which only serves Prohibition-era drinks.

It’s a modern stay today, but given its history, you can expect a few patients and staff to be lingering in the afterlife. Guests have reported seeing spirits and unexplained cold spots, especially on the second floor of the west wing.

8. Haunted Hill at the end of Menaul

The east end of Menaul Boulevard ends at a parking lot in the foothills of the Sandia Mountains, a popular hiking and mountain biking area. Just beyond the parking lot and trailhead is a juniper-covered hill.

Over the years, Albuquerqueans hanging out here at night have been scared off by the disembodied sounds of screaming, thrown rocks and the sounds of something heavy being dragged through the gravel. As the story goes, an insane hermit lived in a cave nearby and would lure and murder prostitutes here. True or not, plenty of people attest to something dark in this area.

Located behind Hotel Parq Central, the Albuquerque Press Club is a private club for journalists. Its log cabin architecture is strange for Albuquerque, which is mostly adobe or 1920s bungalow construction. It was built in 1903 by the Whittlesey family, and modeled after a Norwegian villa complete with a huge stone fireplace.

Over the years, rooms were rented out to recovering patients from the nearby hospital (now Hotel Parq Central). Today, staff report hearing the sound of high heels on the wooden floors when no one else is around, voices, the piano playing by itself and the vision of a woman dressed in black that the staff calls Mrs. M.

Just a quick 20-mile drive south of Albuquerque in Los Lunas, the Luna Mansion today is a popular restaurant. It was built in the 1880s by the Santa Fe Railway to thank the Luna-Otero family for granting a right-of-way through their extensive property. Its Victorian Southern Colonial style, made of adobe, is unique to New Mexico.

Josefita Otero so loved her home that when she passed away in 1951, many believe she never left. By all accounts she was a kind woman in life, and her ghost has been seen on the stairs and in two rooms upstairs that were once bedrooms. One of those rooms is now called Spirit Lounge as a nod to Josefita. Both staff and guests have seen her dressed in 1920s finery, only to vanish. A young man dressed in period clothes has also been seen sitting by staff members.

Have an Albuquerque ghost story of your own? Please share it in the comments below!

Is Away Luggage Really Worth It?